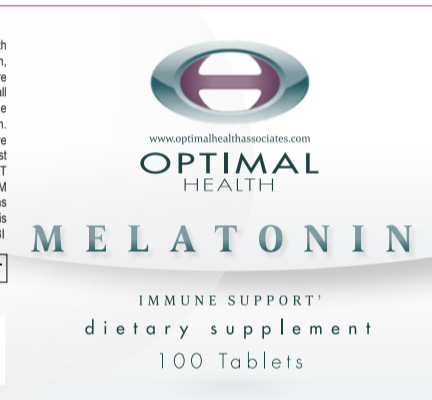 Melatonin has been shown to support antioxidant activity, cardiovascular health, and immune function. This formulation is available as 1 mg tablets for flexible dosing.

Antioxidant Support Melatonin has been shown to be a powerful antioxidant inducer. It supports glutathione production and stimulates intracellular antioxidant enzyme production, including superoxide dismutase and glutathione peroxidase.18 It has also been found to scavenge free radicals and promote cytokine balance, which helps maintain normal inflammatory balance.19 Melatonin is also able to pass through the lipid part of low-density lipoprotein (LDL) and act as an antioxidant in cells.

Sleep Support Melatonin supports the quality of healthy sleep as it relates to falling asleep, sleep efficiency, and awakening. Five milligrams of melatonin has been found to be associated with a reduction in sleep onset latency by up to 16 minutes in children aged 6-14 yrs,8-10 and similar results were found in children using 3 mg of melatonin before bedtime.11 In adults, studies have shown that doses between 0.3-75mg have a positive effect on increasing total sleep time and reducing the time it takes to fall asleep.12,13 Two studies using 5 mg of melatonin in adults with delayed sleep, found the melatonin shortened the time it took to fall asleep by 82 minutes and 115 minutes in the first and second studies.14,15 A study of subjects who took melatonin for one week had better initiation, maintenance, efficacy, and activity of sleep when compared to placebo.2 Another randomized, double-blind, placebo-controlled study of 33 subjects found melatonin to support the onset, quality, depth, and length of sleep without daytime sleepiness.16 Finally, a review of 10 trials suggests that melatonin supplementation also helps support sleep patterns in individuals crossing time zones.